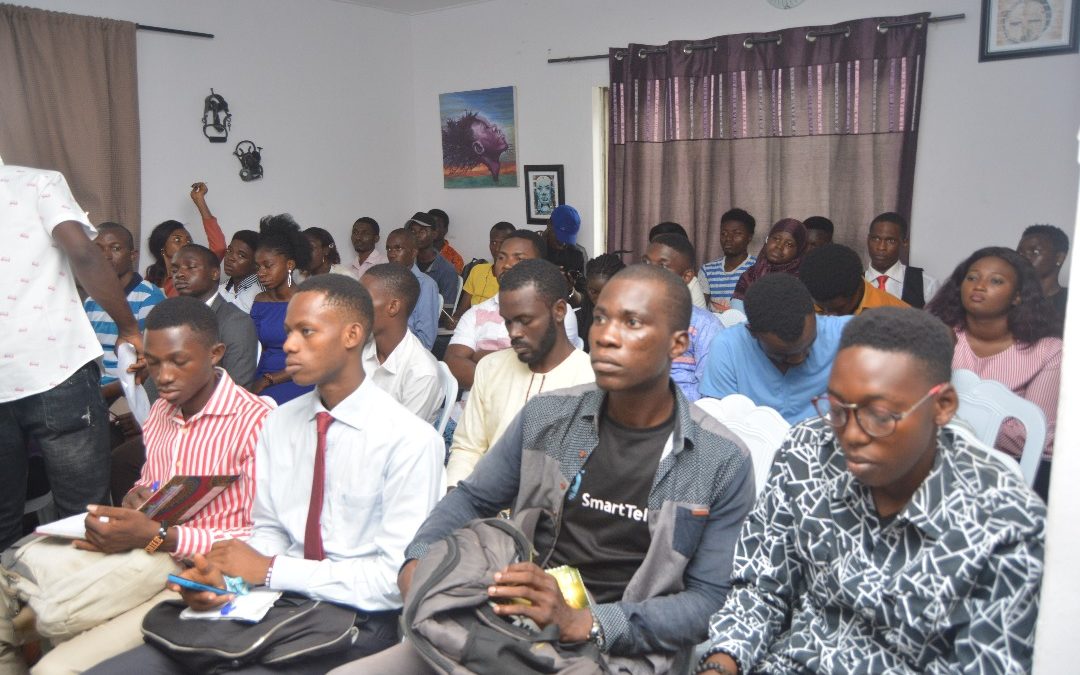 Nigeria’s foremost Digital Content Platform, the OnlineHubNG.com on Sunday, July 15, 2018 hosted a pool of TechPreneurs and Tech Enthusiasts in and around Ogun State at the second edition of her annual #TechPreneursHangout (a special World Youth Skills Day #WYSD2018 event) at NEST by KUTA, Oke-Ilewo, Abeokuta. TechPreneurs Hangout is an annual convergence for coders, developers, programmers, graphics designers, creative curators, content writers, illustrators, digital enthusiast, bloggers, social media handlers and tech policy makers in and around the city of Abeokuta, Ogun State and Nigeria as a whole to innovate, collaborate and explore new frontiers in this digital-driven emerging economy.

The team at OnlineHubNG invited arrays of distinguished speakers and panelists who are experts in their various fields to throw a live interactive session amongst other TechPreneurs, existing and aspiring business owners and other Tech-lovers who were present at the HangOut in rock city of Abeokuta.

The second edition of #TechPreneursHangout Abeokuta is in commemoration of the 2018 United Nations World Youth Skills Day #WYSD2018 with the theme: “Build, Make and Create: Upskilling Nigerian Youth for TechPreneurship”. 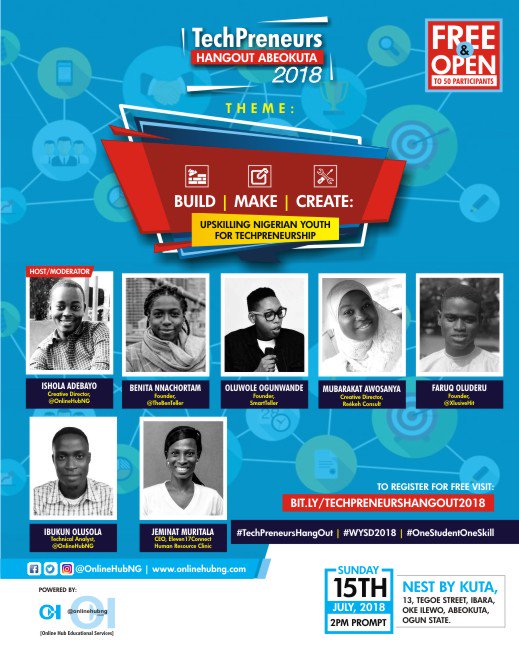 Ishola Adebayo (Creative Director, OnlineHubNG) who was the moderator, lightened up the atmosphere by welcoming TechPreneurs and other Tech Enthusiasts present while intimating them on what #TechPreneursHangout centered around and made the participants introduced themselves.

Afterwards, he had a specialized training session where taught digital skills, introduction to mobile advertising, career opportunities in the digital world and how young people can begin to leverage on technology for social good.

The first speaker, Miss. Mubarakat Awosanya, of Reekeh consult anchored the first Panel Session where she spoke on “Harnessing the Power of Social Media for Health Promotion”. She explained and spoke on how social media could play a striking role in management of health related issues. According to her, physical diagnosis cannot be completely eradicated, there could only be a virtual hospital with organization based medical records. She also explained that while pushing out Health-based contents on social media, it must be ensured that the information is correct to avoid patients being misinformed or misled and there must be enough Call-To-Action to encourage participation. The session ended with Questions and Answers facilitated by Ibukun Olusola, the Tech Analyst of OnlineHubNG. 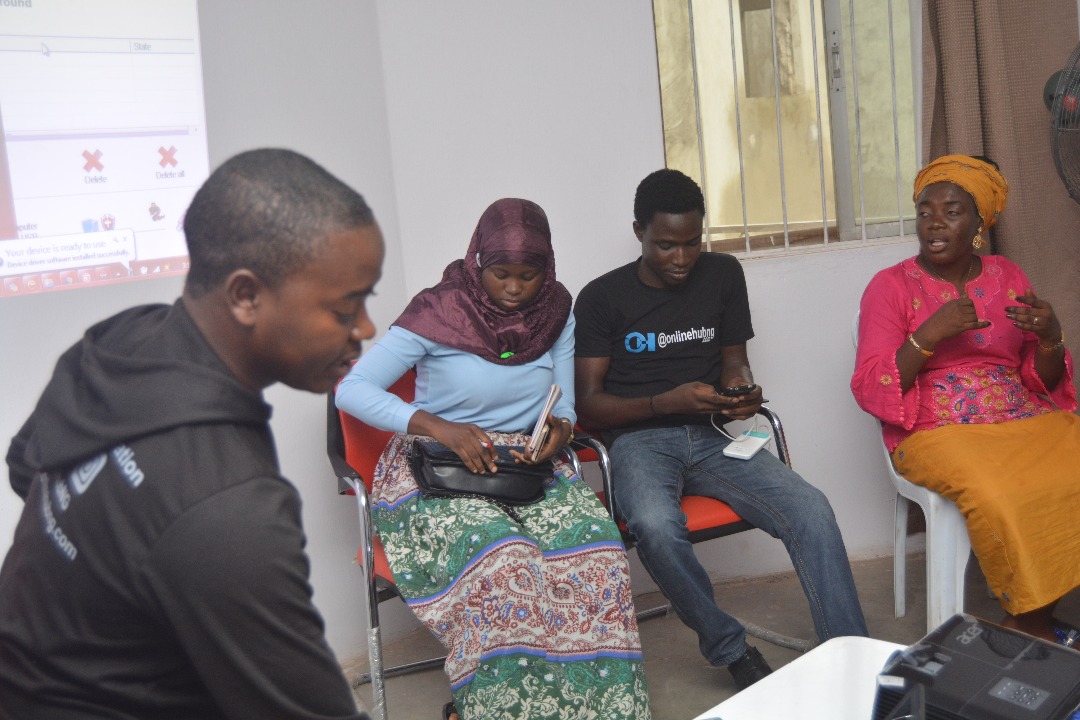 The second guest, Oluwole Ogunwande (Founder, SmartTeller), spoke on “Leveraging on Technology to Create Financial Inclusion”. He also explained the huge market value in the FinTech Industry. He introduced TechPreneurs present at the hangout to SmartTeller.net, a Digital Banking platform for Associations, Thrift Collectors, Cooperatives and Microfinance Institutions. The platform basically builds financial infrastructure for unserved and underserved populations.

The third speaker was Egha Maxwell (Max Studio), a Digital Painter and Cinematographer. He spoke on the advantages and benefits of Digital Art which includes difficulty in losing artwork, saving of energy and time. etc 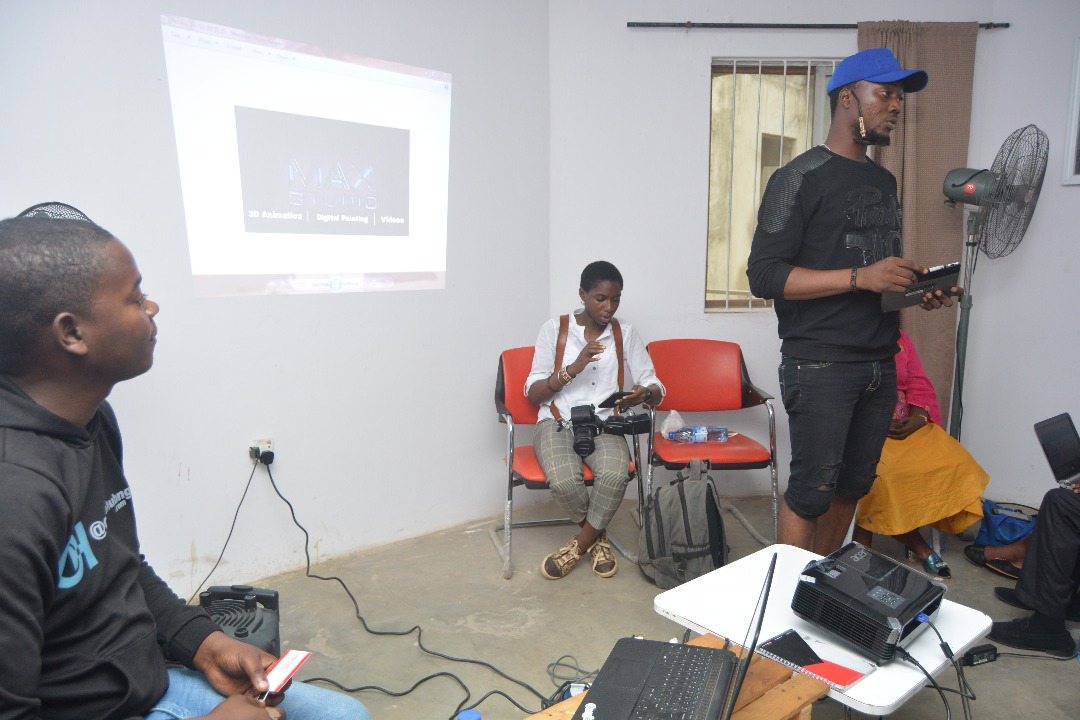 Jeminat Muritala, CEO of Eleven17 Connect, came on board and shared her passion on AgricTech. She believes we can be the change we intended to see instead of sitting back and complaining. She also encouraged the Tech-Lovers at the event to use the resources at their disposal to develop Ogun State rather than running to Lagos State which is relatively more developed.

Our friends from the Association of Deaf people in Ogun State were not left out at the hangout event. They were present in good numbers with their interpreters. Towards the end of the program, their spokesman talked about challenges such as isolation and resentment associated with their auditory impairment. He also encouraged TechPreneurs present to learn sign the language for proper communication. He mentioned that the Deaf will be grateful if there could be collaborations on workshops that would encourage and train them on relevant skills that would be needed in Labour Market for the emerging future of work.

Benita Nnachortam, (Creative Director, TheBenTeller), concluded the session by charging the audience to list out the current problems in the society, particularly here in Ogun State. Prevalent issues listed by TechPreneurs include: Workspace, Internet, Funding, and Electricity. 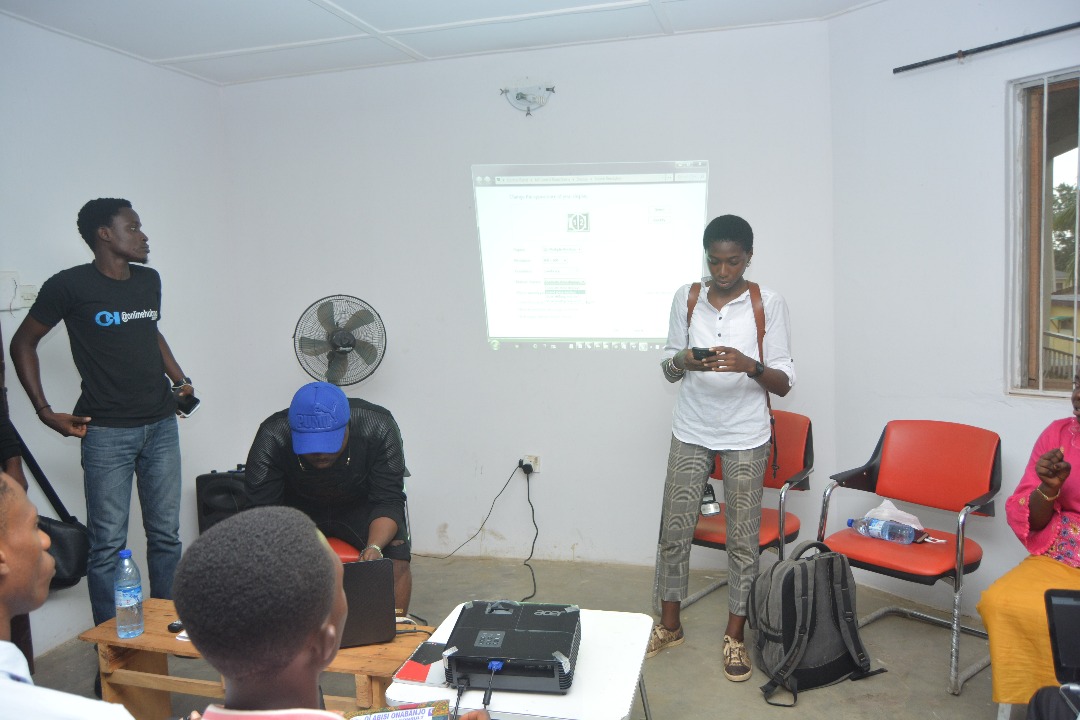 She urged the participants to discover more problems in their locality and try to proffer solutions to these societal problems.

Ishola Adebayo of OnlineHubNG noted the following resolutions to recap the second edition of TechPreneursHangout in Abeokuta:

Can tech ever really be neutral?

Cloud Is Not a Digital Transformation Strategy (Unless You Are Amazon)